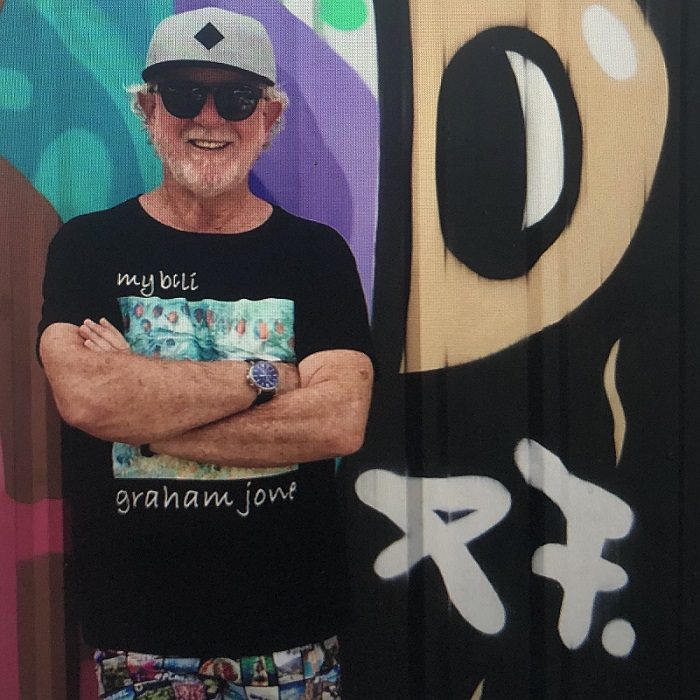 Much of Graham Jones’ life has been consumed with some sort of artistic venture covering the genres of music, writing and design, where he forged successful careers in all three areas. He is probably best known throughout Australia for his award-winning home design company GRAHAM JONES DESIGN. After selling this company in 2006 he became Design Consultant to the Royal Family in Abu Dhabi, the United Arab Emirates, where he worked for seven years. It wasn’t until 2015 that Graham chose painting as a full time career, a break of 50 years since he had won the school art prize at St. Bede’s College Mentone in 1965.

As a developing artist, he is still seeking to find his voice and whilst many of his paintings are landscape based, they walk a fine line between realism and abstraction. A new passion for working large has certainly seen a leaning towards abstract in his latest works. With immense energy and a robust work ethic, Graham Jones has completed over 600 works in under 5 years forcing him to move three times as he continually outgrows his studios. He has recently signed a Commercial Agency Agreement with an Interior Design fit-out company in Abu Dhabi to supply his fine art prints and large bespoke paintings to the hotel and commercial markets throughout the MENA region (Middle East North Africa). His first international solo exhibition opens in Abu Dhabi on February 1st 2020.

After an overwhelming response from 1500 artists from 25 countries, Graham Jones was selected as an “Artist-in Residence” at the stunning Chateau d’Orquevaux, Champagne-Ardenne France during May 2018. He returned again in September 2019 and has been invited back once more in 2020. Graham’s painting “Bay of Fires” was chosen by Deborah Trudeau, the President of the IWF (International Women’s Forum) for the design of a silk scarf by Australian fashion Designer Lisa Barron which became the centrepiece of the 2018 IWF World Conference held in Melbourne in May 2018. His fine acrylic paintings are held in private collections in the USA, France, Hungary, Netherlands, Indonesia and the United Arab Emirates as well as throughout Australia.